One lap at a time 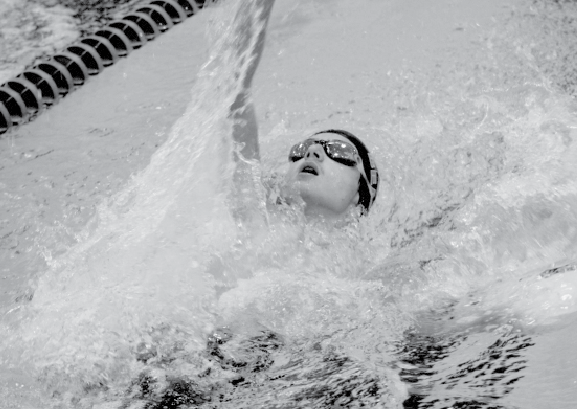 At the varsity swim meet at Omaha South High Magnet on Dec. 5, sophomore Micah Heyen swims the 100 meter backstroke. Heyen ended up getting disquallifed from the race because he failed to touch the wall.

With one meet and one invitational under their belts, the swim season is underway and under the leadership of new head coach Drew Butler and assistant coach Larry St. Hilaire.

Saturday’s Benson Invitational pit the boys and girls teams against five other teams: Omaha Central, Omaha North, Omaha South, Bellevue East and Omaha Benson. While the boys fell to the other schools, the girls came in fourth, beating the Vikings and the Bunnies.

“The girls this year are more dedicated, at least the ones coming to practice,” Stewart said. “Overall, it’s going to decrease our time as a whole.”

Just two days before the invite the team had their first meet of the season, a dual against Omaha South. The team ultimately came up short with a girl’s score of 61-116, and a boy’s score of 71-89. However, assistant coach Larry St. Hilaire believes that the swimmers learned a lot from the meet and says they will use the experience to get better.

“The team did really well for the first meet,” he said. “There is a lot of fundamentals that we have to go back and review and see what kind of coaching techniques stick with the swimmers.”

And while they haven’t seen meet wins yet, the team has already noticed improvement under Butler’s coaching.

“He teaches us the techniques of swimming and the fundamentals of swimming and not just making us swim a lot,” sophomore Joaquin Urias said after the duel against South. “Last year I ended the season with 32 seconds but after this meet I dropped two seconds off my time.”