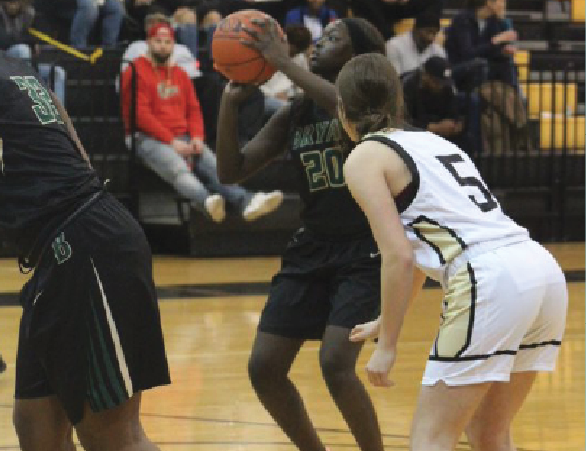 Preparing to shoot a free throw junior Sarah Mure on Feb.14 versed Burke High at home. The girls ended up losing the game 75-14.

The 2019-2020 girls basketball season is coming to an end with the last game happening on Feb. 21 and then they will be on their way to districts on Feb.24 for the Varsity Lady Bears.

The girls’ team record is currently 2-18, with both wins against the school’s rival team Omaha South. The lady bears are currently ranked 15th in the state.

“It was great winning our game because we worked as a team and everyone put their heart into it,” junior Sarah Mure said.

The girls have met all their goals they set last year as a team such as to win a game, to make it past the first round in the Omaha Public Schools (OPS) jamboree, to become better as a team, to never lose hope and not only believe in themselves but also in their teammates.

“Everyone is developing and being put into position to grow as a student athlete,” Head Coach Nicole Mitchell said.

Mitchell has been teaching the girls how to develop as a whole team and how to believe in themselves. She believes that everyone is developing and being put into a position that will make them grow as a student athlete.

“Developing as a team whether its individually, academically or athletically [is important]. Also, building confidence in the girls and coaching staff to believe and trust themselves,” Mitchell said.

Although the ladies they have only won two games so far. They hope to come back even better next season. To become better goals have already been set for the next season academically and on the court. Coach Mitchell expects the girls to have a 3.0 GPA and to make it to the second round of districts.

“Many challenges we faced and overcame my two seasons as a coach and not once did we give up or stop fighting together,” Mitchell said. “So far, we have made it through the struggles together and continue to grow and develop together.”