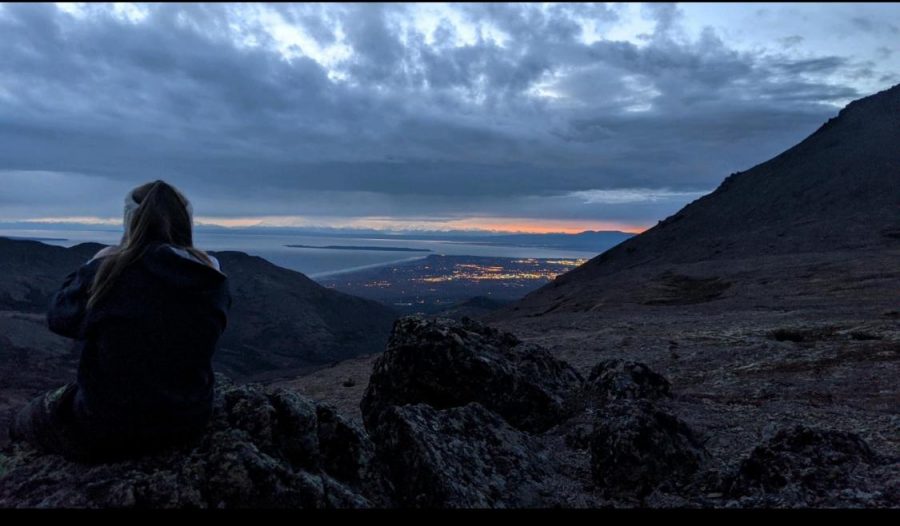 After climbing four hours to the top of a 2,500 ft mountain with her brother, junior Isabel Stewart takes a seat on some rocks and stares off in the distance reflecting on her journey. “When I finally reached the top I was like hallelujah, because my legs were burning,” Stewart said. “I felt accomplished when I got to the top. The view was unreal, it was absolutely beautiful, one of the prettiest views for sure.”

For some people, COVID-19 has taken a lot, but for others, the pandemic has created many new opportunities for people instead of taking them away. For one junior, it created an opportunity for her to live in Alaska. She got to experience beautiful hikes and Alaska’s wildlife all due to COVID-19.

Up until the start of second quarter, Junior Isabel Stewart was in Anchorage, Alaska doing online classes via an iPad. She would not have been able to do her classes if it weren’t for her senior Army instructor for JROTC, Major  Eric Hendrickson who was in support of her temporary move to Alaska.

“I thought it was interesting,” Hendrickson said. “The way we are on virtually you can be pretty much anywhere in the world it doesn’t really where you’re at as long as you can connect.”

Stewart was in Alaska to visit her older brother who is currently stationed there for the Air Force and she thought that she would never get the opportunity to go and stay there with him again. She stayed with her brother, his wife and their puppy.

“It was amazing living with my brother, his wife and their puppy, every day was a new thing,” Stewart said. “Especially since I don’t see them often and I hadn’t seen them in almost two years.”

Alaska is three hours behind Nebraska, so she started class at 4:40 a.m., while other students started class at 7:40 a.m. The hardest part about the whole trip to Stewart was not being able to see her friends, like junior Ruby Nelson, every day. Not getting hands on experience in her  classes was also bothersome.

“I’m really happy for her and glad that she [got to] spend time with her brother and sister-in-law,” Nelson said. “The hardest part for me [was] not being able to see her and spend time with her but we definitely still Facetimed and all that while she [was] in Alaska.”

With all that being said, there were still some good aspects to the whole situation. Stewart got to go to on hikes that had beautiful scenery and wild life. At one point she even encountered a moose.

“I decided to take it [the chance to go to Alaska],” Stewart said. “I have gotten to see more of the world and get an experience that I normally would never get. As well as see a whole lot of nature such as mountains, lakes and oceans.”

Stewart returned to Nebraska on Oct. 3. She was a bit nervous, because she had to fly for 12 hours by herself. Overall, she was sad to leave Alaska, but she was also excited about seeing her friends and family back home that she missed while living in Alaska.