Susnjar wins Coach of the Year 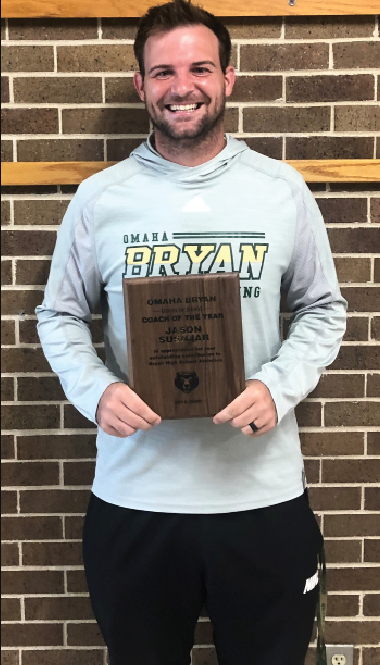 After being awarded Coach of the Year, head wrestling coach Jason Susnjar poses with his plaque for a photograph outside the gym in August.

To help improve sports teams with competing and self confidence, the athletic department has a new award. “Coach of the year” was awarded for the first time to head wrestling coach Jason Susnjar. Athletic director Ryan Murtaugh helped create the award this year.

“I was shocked and extremely happy, I was happy for our team,” Susnjar said.

Murtaugh wanted this award to help motivate all of our athletic teams and just reassure them of all their hard work.

“I thought it would be kind of a great tool for the coaches to reward them for all the effort and time that they put in each and every day in regard to working with our student athletes,” Murtaugh said.

Throughout the year, each coach will be evaluated according to seven different criteria. The seven criteria are being a great recruiter for their team, ties to a strong youth program, high expectations for student athletes, being a great developer, being a great role model, having a program that is financially self-sufficient and lastly being an overall successful team.

Only coaches who fit all or most of the criteria  move on to the final stage, then one coach out of them all will be chosen and awarded the coach of the year award.

“We’ve got some great coaches here at Bryan and it was kind of stiff competition,” Murtaugh said. “But in the end, I felt that coach Susnjar, in terms of criteria, was able to check off each and every box.”

Along with the title Susnjar also received a plaque with his picture on it, that is placed adjacent to the competition gym under the heading “coach of the year.”

“I think he deserved that award more than most,” senior Jake Schoenauer said. “He can push someone to be the greatest they can be. If you want to succeed he would push you to that goal, he’s a tough coach but can make an average athlete into much more.”