Pandemic increases the need in shelters and foodbanks 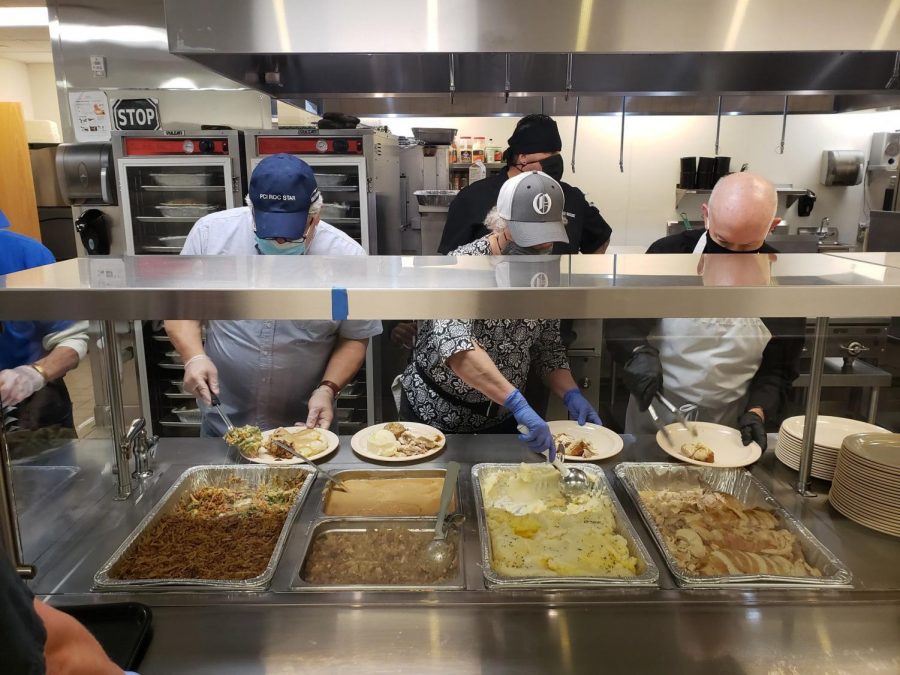 Dishing out food to serve to people at the Stephen Center on Thanksgiving, volunteers aid in the process of making plates.

The world seems cruel, crueler than ever. Amid disease and death and loss, one must turn to the helpful hands of another to even begin to imagine the end of harder times

The Foodbank for the Heartland, a food distribution center for those in need in Nebraska and Iowa, and the Stephen’s Center, a homeless shelter in Omaha, have been working tirelessly throughout the year to help those unable to provide for themselves and their families.

“There have been disruptions in the food supply chain, it was really significant in spring,” Communications Manager at Foodbank for the Heartland Angela Grote said, “it has sort of leveled out, but occasionally we have trouble getting some of the food we need, and we are distributing more food than ever before.”

“I had the opportunity to visit with a woman, her name is Amber, she said her husband had lost his job because of the pandemic,” Grote said, “He eventually found other work, but after paying household bills, their family just has 60 dollars to spend on food and that’s not enough for amber and her husband and her two children.”

1 in 4 heartland children (those under the age of 18) are food insecure, it’s a noticeable difference compared to the 1in 6 of the previous year, and it’s a difficult thing for parents to face, knowing they can’t afford the food they need.

“Amber never expected to be in a situation where she couldn’t feed her children and needed help, and we’re hearing that from so many others,” Grote said, “that’s why the foodbank is here, and our team has been working relentlessly with partners all across the community.”

The heartland is partnered with both grocery stores and manufacturers, such as Kellogg’s. Though, on December 5 from nine to noon, the foodbank is hosting a drive-up food drive to encourage people to stock their shelves and make the holiday season a little bit brighter for the families they serve.

“People can stay in their vehicles and we’ll have volunteers and staff members on site to help unload bags and boxes to help prioritize the health and safety of the community during the pandemic,” Grote said.

The Stephen Center has two dorms, one for men and one for women, with 32 beds in each. For quarantine purposes, they set aside eight beds per dorm. Those new to the shelter are kept there for 72 hours, in case they have covid, until they can join the rest of the shelter population.

“Being homeless isn’t something that people would choose, so when they come to a homeless shelter theyre already at a low point,” Development Director at Stephen Center Dawn Olijnek said, “and when you add the constraints of a pandemic, there’s just additional challenges.”

Each homeless person who stays gets in contact with a case manager, who helps them connect with resources to get them back to housing. To keep both guests and case managers safe, the shelter now sets up zoom call-like meetings for those who want to get back on their feet.

“Initially, I think it was hard because we all had to figure out how to do our jobs in different ways,” Olijnek said, “but then it’s kind of made everybody more confident in their ability to adapt.”

Aside from zoom call-like meetings, other changes have been made due to the pandemic. Since the start, expenses have gone up and volunteer numbers have dwindled because visitors had to stay at the shelter and volunteers had to stay home.

“As we’ve all kind of adapted and moved through here, we’ve been seeing our volunteer numbers go back up because if you’re willing to volunteer we can find a spot for you,” Olijnek said, “cases are increasing, and a lot of our older volunteers are choosing to protect themselves, which we completely understand.”

The Stephen Center serves 250 people per day and 200,000 meals per year, and every year, until December 31, they have a turkey and ham drive, though, due to the ungodly virus, less people have been donating.

“Donations like that, or if people can’t get to the store to purchase those items then just a gift card or a check or something, because we rely on those turkeys and hams to feed our clients year-round,” Olijnek said, “I heard our
kitchen manager this morning saying last year around this time he thought had 360 turkeys and hams and right now we’re around 120.”

To support the homeless shelter, one can help with their Amazon Wishlist which is full of necessary items and, for the holiday season just around the corner, items that shelter guests and people in their recovery program request for Christmas gifts.

“We’re trying to fill wish lists with donations we’re getting in to make the holiday special for the folks that are here,” Olijnek said.