MLK contest participants get creative with their art 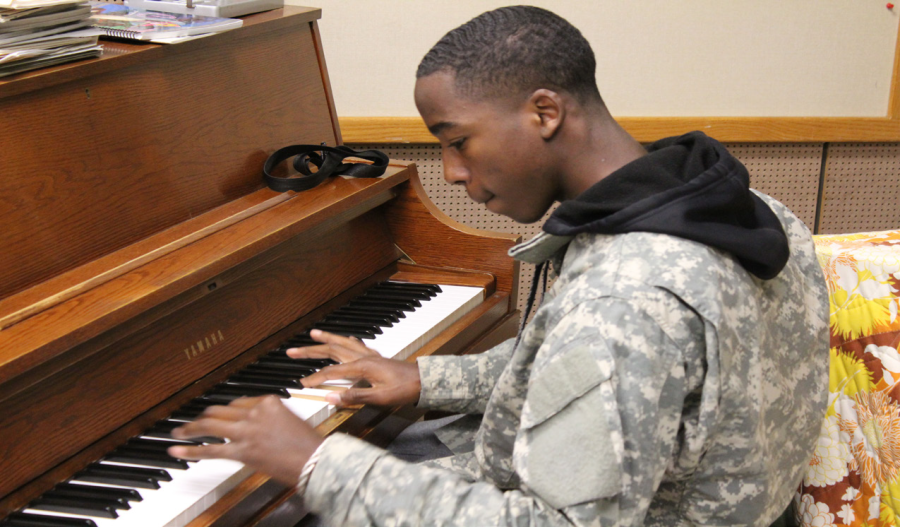 Playing the piano, senior Don Hannon practices for the Martin Luther King Jr. contest in January. Hannon will be playing the piano while performing a song he wrote.

The annual MLK contest is a competition that encourages high school and middle school students from the Omaha area to adopt principles from social and human rights warriors throughout history to their life and and present it in an original way, via a speech, song, a poem, etc.
Social Studies teacher Nicholas Clawson encouraged students to join the competition as a way to express their creativity and feelings in a competition. The four students joining are Mi’Khel Thomas, Don Hannon, Julie Iraheta-Umana and Daphne Valadez. Both Julie and Daphne will be working as a duo.
“I try to encourage them to sign up and then I try to coach them,” Clawson said.
There are different categories in what a student can choose for the competition. Short essay, spoken word, vocal music, instrumental music and dance are all categories that can be chosen by students.
Hannon, a senior, will be playing the piano, rapping and singing about problems with taxes, police brutality and racism.
“Its important to me, because I live that everyday life of being a black student and young [black] male,” Hannon said.
His original plan was to sing a J. Cole song, but instead he will be singing a song he wrote. Hannon also plays football, basketball, and does track, so this performance may or may not come as a surprise to some.
“I don’t think it will [come as a surprise], because most people already know I play a lot of instruments.”
Junior Mi’Khel Thomas will be talking about problems in the community, like equality and increasing people’s pay. Thomas placed third at the competition last year.
“I feel like it’s a big problem within the community and it’s obviously not complete equal yet, within certain areas,” Thomas said. “I feel like that’s something that should’ve been fixed.”
Valadez and Iraheta-Umana will be performing a speech in which they will talk about topics like immigration and the problems immigrants face.
“I wanted my voice to be heard,” Valadez said. “I think it’s something not a lot of people focus on.”
The grand prize winner will receive $1,000 and their trophy. The competition will be at the Holland Performing Arts Center and will start on January 17, 2022, which lands on Martin Luther King Jr. Day.