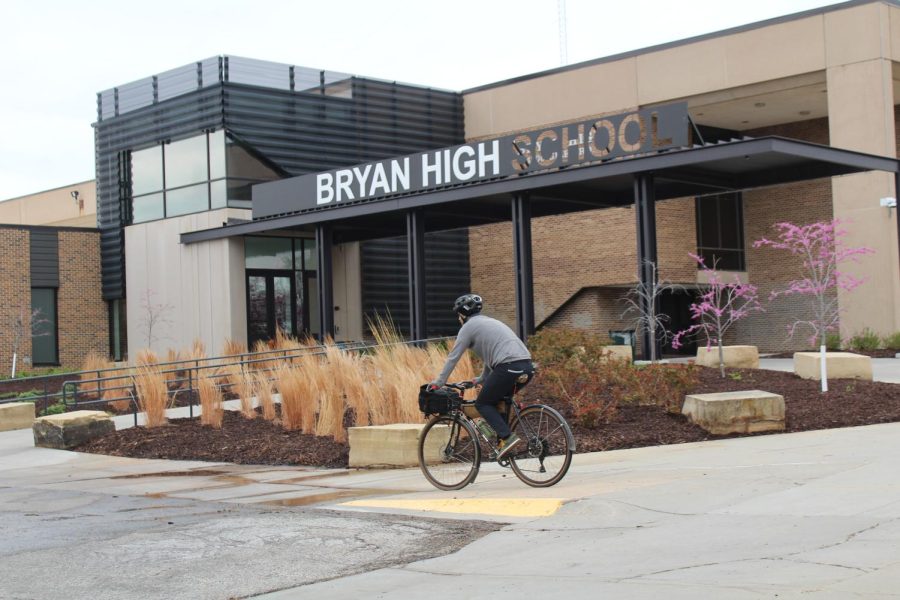 Driving cars to school is something teachers and students have begun doing for decades. It’s pretty much the default method of commuting next to walking. However, several teachers defy that reality in Bear Country.
Social studies teacher Nicholas Wennstedt and science teacher Eduardo Walmrath have been biking to school since the early 2010s. And while it is a more lengthy method of travel, they’ve found its benefits outweigh driving.
“It’s a lot of fun,” Wennstedt said. “If I’m tired in the morning the bike ride can wake me up or if I have either a long day or stressful day at work, the ride home can really help relive a lot of that, and you know, gas isn’t cheap.”
Wennstedt has been biking to work since 2014. He first started because he had always been into biking and wanted to find another way to ride his bike more and find a healthier efficient way of commuting. On days that he can’t bike like when the weather doesn’t allow it, he’ll still end up waking up at the biking time and just arriving to school early.
“I usually bike by myself, but I do go ride with other teachers sometimes,” Wennstedt said. “Now though, I do ride sometimes with Mr. Clawson on the weekends. And then just last week I rode with Mr. Clawson and Mr. Tot. We rode around North Omaha little bit and got out of the city.”

Walmrath hasn’t been at school as long as Wennstedt, he still started biking to school in 2012, which was around the same time as Wennstedt. Walmrath moved to Omaha from Brazil in 2017.
When Walmrath would bike to his old job, he’d have to get the ones that are for rent, when he moved to Omaha, he was able to buy his own and from there he’s been biking often. He likes going on the trails in Omaha to bike with his family or by himself.

“It’s a good work out first of all,” Walmrath said. “Maintenance of a bike is cheaper; you don’t have to pay for things like for a car for a registration and cost of maintenance is much higher.”
During the pandemic, Wennstedt took time out to introduce some other teachers to the biking lifestyle including social studies teacher Nicholas Clawson, who now bikes regularly during his free time.
“I love cycling now, it played a huge role in my personal life,” Clawson said. “Once you start pushing towards 40 you’ve got to exercise. You’re not going to be young and full of infinite energy always.”
For anyone who now reading this and is interested in biking, Wennstedt offers advice on what to watch out for while beginning your journey.
“It doesn’t matter what kind of bike you have as long as you just get out and do it and start small,” Wennstedt said. “Don’t feel like you have to complete get rid of your car first try or anything like that. If your bike isn’t in working order, get into a bike shop because a bike that doesn’t work is going to be frustrating. But start small, try to replace one car trip a week or something like that and then you can see what’s possible.”