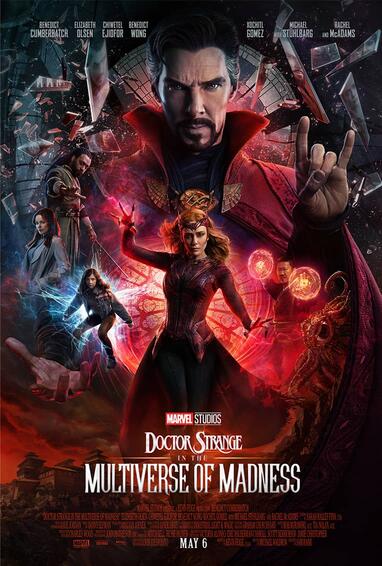 Casting a spell on Marvel fans, the trailer for Doctor Strange in the Multiverse of Madness tricked fans into thinking the movie, released on May 6, would be the next big Marvel film, but it wasn’t.

Despite being one of the most highly anticipated movies of the year and Marvel’s latest release in Phase 4, the movie fell flat. It was very disappointing and bland.

Multiverse of Madness follows Doctor Stephen Strange who must team up with America Chavez, a girl with the power to travel between universes, after she arrives in his universe on the run from a demon creature. Dr. Strange recognizes the runes on the demon, and consults Wanda Maximoff, who he soon realizes is the one who sent the demon.

The duo must travel between universes to find the book of Vishanti, which holds the key to defeating Wanda, who became the Scarlet Witch after acquiring a book of spells called the Darkhold, also known as the Book of Sins.

Benedict Cumberbatch, who plays Doctor Strange, does a great job portraying a character who must make hard decisions that contradict his beliefs in order to defeat someone who threatens the fate of the entire multiverse.

Xochitl Gomez, who portrays America Chavez, and Elizabeth Olsen, who plays Wanda Maximoff, both do a great job portraying their respective characters as well. America is a scared child who has been accidentally traveling through the multiverse, all the while being chased by a demon creature, and Gomez does a great job of depicting the emotions her character was feeling.

Olsen also does a great job of portraying her character, someone who is so overcome by grief and the loss of her family that she is willing to do anything to get them back, no matter the consequences.

Despite the actors portraying the characters well, the movie itself was very mind-bending, and not in a good way. While a little mind-bending should be expected in a movie that deals with characters that can alter reality, this movie did not do it right. Scenes in the movie weren’t cohesive, they were very choppy and often didn’t flow well together and there were too many mind-bending scenes to the point that the movie got confusing.

Although viewers might find the movie less confusing if they’ve watched previous Marvel movies and shows like WandaVision and the first Doctor Strange movie.

The ending was also very unsatisfactory. Everything felt rushed and the characters’ actions at the end felt very out of place considering everything else they had done throughout the movie.

One of the only good things about this movie, not including the characters, is that the first end credit scene felt like it was setting up another movie that would be huge for the fate of the Doctor Strange character.