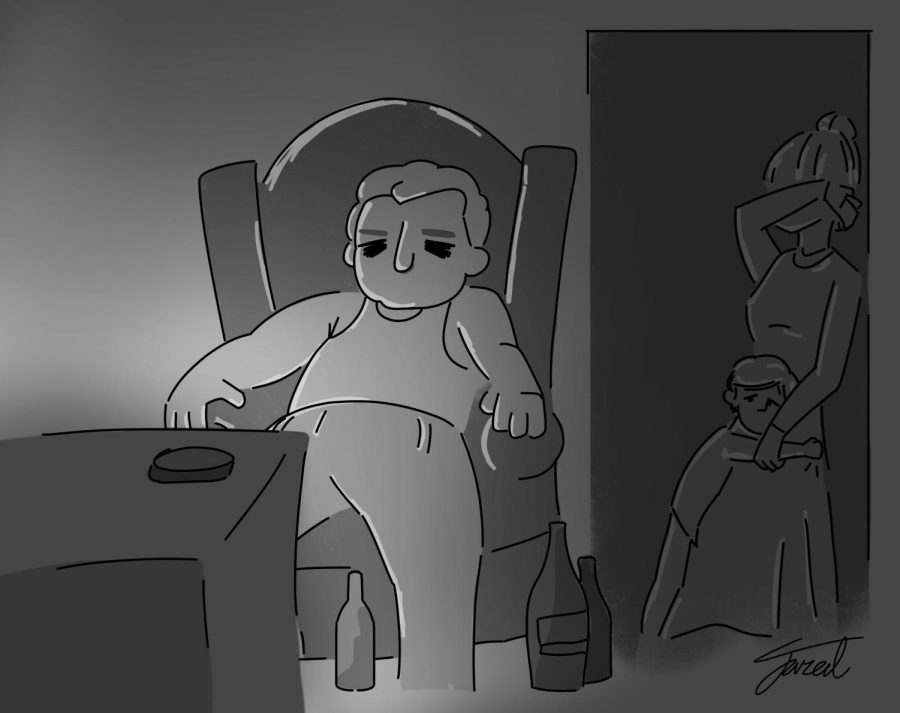 For the majority of my life I only had one parent, although my dad was there physically, it never actually felt like he was because he was always in his own world. It didn’t only hurt me seeing him like this, but it hurt my mom and my sister.

It hurt my sister and I constantly to see our mom look so confused and desperate to keep us going in life without the emotional support of our dad, but it also hurt us having to see her look so lonely. The man that she married and loved wasn’t the same person anymore; he was the only family she had in Nebraska.

My dad was never an abusive person when he was drunk. He never laid a single hand on us, but I just couldn’t stand being near him. His attitude and personality were so irritating when he was an alcoholic. He had sudden mood changes and it was like playing Russian Roulette every time you talked to him. It was all so mentally draining.

Once I got into middle school as expected my dad is still an alcoholic. He missed out on a lot of our childhood; as time passed he tried to stop drinking; I saw his effort, but I couldn’t forgive him or see him as a dad.

During my freshman year, my dad stopped drinking. He’s stopped drinking for about a year now and we’ve never been happier. It’s still hard to talk to him as if he didn’t miss about 10 years of our lives, but it’s a good feeling knowing that I actually have two parents now.

Addiction doesn’t only affect the addicts, it also affects their loved ones, it affects the addict mentally and physically. A couple of months after he stopped drinking he apologized multiple times for never being there for us, he told us he regrets what he did, and he told us that he regrets missing our childhood.

During those long years of addiction, his physique changed a lot. He became really skinny; his bones stood out way more and his clothes were baggier. Now that he stopped, he’s gained weight, his face and body went back to normal and his clothes are less baggy, but his recovery wasn’t so quick.

My dad started to gain back his weight after about two months and mentally it took him over three months to recover. Alcoholism left with him long-lasting effects; sometimes he starts to break out in cold sweat because he suddenly craves alcohol, but he resists the need for it, even if it’s hard to do it

Going through all of this was draining and now the problem is that my friends are going down the same path my dad did without realizing that harmful substances do have a long-lasting impact and that it’s not just for “fun”.

A lot of my friends use marijuana in some way, whether they use blunts, dab pens or edibles, they’re still getting harmed even if they don’t notice it. A lot of times they just say that the damage marijuana causes is only if you have low tolerance, but that’s not the truth.

Marijuana affects the brain when the brain is still developing. Using marijuana impacts how connections are formed within the brain due to the developing brain’s high sensitivity to drug exposure. Marijuana doesn’t only affect the brain though, it affects them as a person and the relationships the person has.

The friends I had since elementary school used to be happier and nonchalant, but when marijuana got into their system they became more serious with a lot more noticeable attitude. It all reminds me of my dad and how we got pushed away slowly after he became too irritating to be by.

People overlook the damage drugs have on relationships. It causes the people who care about you to avoid you and fear you.

We need to do better not just as a friend but as a community to help keep the people we care about stay safe. It’s important that we never shame them for what they do because it’s not something that’s easy to get out of, so let’s do a better job at informing without the need of judging.

Those who are or know someone who is dealing with addiction are encouraged to seek help.

Resources are available to those who are or know someone who are dealing with addiction or substance abuse.

The following hotlines are available 24/7 365 days a year in English and Spanish.

Crisis and resource line staffed by counselors to provide information about a variety of issues, including drug dependency.