Students show up to state capital, fight for their rights

As senior Adri Martinez gives her testimony in support of LB206 on Feb. 1, students and journalism advisers from all across Nebraska listen to her story about fear of censorship and how censorship negatively affects Nebraska student journalists and sometimes their advisers. Proponents of the bill included students and advisers from Omaha, Bellevue, Millard, McCook, Hastings, Gretna, North Platte, and Scribner public schools proving that censorship is common throughout the state. 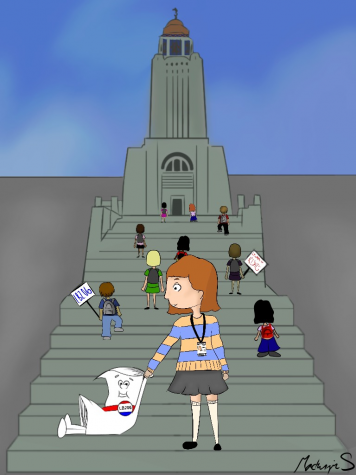 They say third time is the charm.

Legislative Bill 206’s predecessors have been killed by Nebraska senators twice since Feb. 2016. Different versions have been made since, but the mission- which The Orator staff wholeheartedly support- has been the same: protect student journalists.

Unlike professional publications, school newspapers are all under the mercy of administration. LB206 wishes to change that by offering protections to students, advisers and even the school itself.

As long as the publication or its content isn’t slanderous or libelous, violates someone’s privacy or federal or state law, or incites danger, then it should have the right to go to print. Advisers shouldn’t be punished for protecting this right, the school won’t be held responsible for what is written, and the contents won’t be viewed as the opinion of the school or the school’s policy.

There is no good reason to go against LB206. It covers everyone’s bases while not allowing needless censorship or turning a publication into a school’s PR instrument.

Fortunately for us, our administration has, for the most part, stuck behind us student journalists.  However, censorship affects countless schools across the nation and it’s not a new problem. Advocates of LB206, like Cathy Kuhlmeier from the Supreme Court case Hazelwood v. Kuhlmeier, traveled to Lincoln to testify in support.

In the 1980s, Kuhlmeier and her classmates published articles over teen pregnancy and divorce. The principal prohibited them from being printed, and unfortunately, due to the poor work of Kuhlmeier’s attorney, the Supreme Court agreed that the principal had the right to do so.

While Kuhlmeier’s case may seem unique, the harsh reality is that censorship happens all the time, hurting both advisers and students. Other students have gone to the Supreme Court to fight for their first amendment rights- such as the trio of students from Tinker v. Des Moines.

Tinker v. Des Moines is about students who organized a silent protest against the Vietnam War. Students wore black armbands to school to protest. The principal found out about it and told the students they would be suspended if they wore the armbands, students wore them anyway and got suspended. The students and their parents sued the school for violating their right to freedom of speech; the students won the case.

This established students’ right to freedom of speech. It’s disheartening to see that schools in Nebraska- in Omaha- don’t share these morals.

On Feb. 1, dozens of students went to Lincoln to testify in support. All had stories of censorship within their own school.

We do not stand for censorship of any kind. We can’t learn to be good, balanced, truth seeking journalists if we must fear being censored or suspended for reporting the truth. We are firm believers and supporters of the First Amendment, and we intend to fight for other publications like our own.

We strongly ask readers to contact the Nebraska judiciary committee and ask them to support LB206.